A few months ago I posted an article about FamilySearch's "standardized place names" introducing errors (see FamilySearch Introducing Errors) but not only does nothing seem to have been done to fix the errors, but they seem to be getting worse.

I am not talking here about errors in indexing. There are many indexing errors, some of which give rise to place name errors, especially when the original document is not available to correct it.

The errors I am talking about here are not indexing errors but algorithmic errors, when the place name in the index is correct, or almost correct, and FamilySearch's algorithm changes it to something wrong.

These errors can destroy the hard work of indexers, and that of family historians who have contributed to FamilySearch Family Tree. These algorithms should never have been let loose on the database before being tested to avoid such errors. 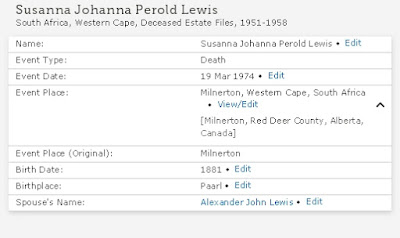 This record, when attached to Family Tree, inserted the place name "Milnerton, Red Deer County, Alberta, Canada", which was altogether wrong. The error was not on the part of the indexer, nor on the part of the person who attached it to a record. The error was in the algorithm, which shifted the event not only to another country, but to a different continent. I copied this event to my RootsMagic database, and corrected the place to "Milnerton, Cape Province, South Africa" (which was more correct for the time of the event) and then copied it back to FamilySearch. But many people might just accept it, and copy the wrong place to their own family tree, and simply think that the family must have emigrated from South Africa to Canada.

Here is another example:

In this case, it seems that large numbers of people who lived in Nebraska, USA, migrated to Northumberland, England, to die. The one shown above is just one example of many.

People in Trans-Caucasia, on the other hand, seemed to prefer to die in Cleveland, UK in the town of Guisborough:

These errors seem to be multiplying rapidly, and the longer the faulty algorithms stay in place, the more degraded the FamilySearch database will become.