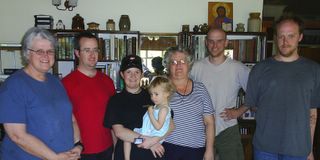 I recently discovered that there were a number of Growden families living in Ontario, Canada, and that a James Growden from our branch of the Growden family went there some time in the 1860s, so I began writing to them to see if they were related.

James Growden married a Harriet Baldwin, and they were living in Lindsay, Ontario, at the time of the 1881 census, with 8 children -- they may have had more after the census.

While I was in KZN a couple of weeks ago I managed to get quite a lot of additional information on the Vause, Harris and Ellis families in the Durban and Pietermaritzburg archives, and within a few days of getting back I had a phone call from Don McArthur who had been researching the same families. That was quite exciting, but it was also rather frustrating, as the e-mails I tried to send him seemed to disappear into a black hole in cyberspace, and for the last 10 days I've been trying to send him a file with family information. His mail has reached me, but mine has not reached him. Sometimes snail mail is faster! Then to top it all, my phone line went on the blink, and I couldn't get e-mail or phone calls from anybody. It seems to be working again this morning, however.

I've managed to trace many of the descendants of William Vause Harris (who was apparently known as Bill), and Don McArthur has managed to find a few more, but nothing at all about Wyatt Vause Harris, who was in Bulawayo in 1938, when his mother died, but what happened to him after that is a mystery (to me, at any rate).

So a note to Don McArthur, if he sees this -- please respon in the comment fields, as that may be a bit more reliable than e-mail at the moment.
Posted by Steve Hayes at 05:13 No comments:

Ione Evans of New Zealand told me about a book Some dreams come true, which had a picture of Henry Green, and now that we have replaced our stolen car I was able to find a copy in the University library, and I've been reading that and The microcosm by Thelma Gutsche, a history of Colesberg.

Between them they give a fairly full picture of the life of Henry Green, though there are still a couple of gaps.

One is what happened between the end of the Orange River Sovereignty in 1854 and his coming to Colesberg as Magistrate in 1860? We know he married his cousin Margaret Aitchison in 1856, and they had two sons, and that his wife and sons died shortly before he arrived in Colesberg. But where was he?

After thinking about it, I thought I'd check for the marriage in England -- could have have gone to England to marry his cousin? It seems unlikely that she would be at the Cape.

So I checked FreeBMD and found a possible, nay, probable, marriage:

If anyone wants the reference to apply for the certificate, I'll be glad to give it. Otherwise, I'll apply.

So watch this space.

Henry's father, William John Green, had recently retred and was living in Kensington around that time, which makes the Chelsea registration district given in Free BMD seem likely. So it seems he spent at least some of the missing years in the UK.
Posted by Steve Hayes at 17:10 1 comment: