Can Clooz replace the Research Data Filer to keep track of paper files?

For a long time now (about 20 years) I have been using the Research Data Filer program to keep track of paper files in my genealogical research.

As you might guess, a 20 year-old-computer program is getting close to retirement age, ready to hand over to a younger and more vigorous successor, and take a well-earned rest.

The trouble is that there is no successor anywhere in sight. There is no program that I know of that can do what the Research Data Filer (RDF) did (and for me, still does).

In 38 years of genealogical research one accumulares a lot of paper -- notes, letters, family trees sent by other people, notes from books and other published sources. How do you keep track of this stuff? How do you remember where you put that note or letter?

Using the ResearchData Filer (RDF) you give every document a number, and you file the documents in numerical order, like this: 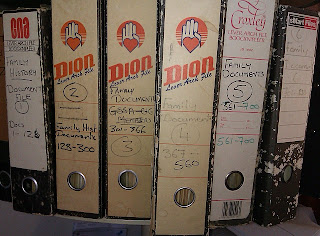 There is no need to file them in any order but numerical, in the order in which they are filed (the KISS principle -- Keep It Simple, Stupid).

Then you use the Research Data Filer to write a description of each document, like this: 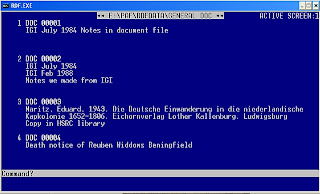 If you look hard you can see that item 3, DOC 00003 is a printed book. No, I did not put the printed book in the file. What I put in the file was a piece of paper with biblographgical information about the book, and extracts of relevant information from it. When I want to see what I put in those notes again, and want to remember where I put them, RDF tells me that it is filed as Document 3, which I filed between Document 2 and Document 4. Simple, isn't it?

But that's not all.

In addition to the "Document" file, RDF also has a "Data" file, which indexes the data within documents. Because we're doing genealogy, we're interested in people, and that's what it indexes. 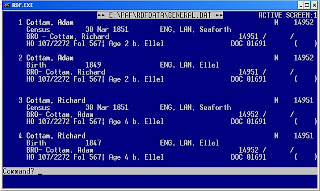 That screen shows a "focus" search on Id 14952, which happens to be the RIN of Adam Cottam in my main fata file. It shows references to one document on this screen, but could also show references to him in many documents. The fields shown are Name, Sex, ID, Event, Event Date, Event Place, Relations, Ids of Relations, Comments, and of course the Document number.  And one can sort the results of a "focus" by name, Id, date, place or relations, and print them out, or save them to another file.

There's more about RDF and how tt helps me to keep track of my paper files here.

RDF used to come with early editions of PAF, the Personal Ancestral File program distributed by the Church of Jesus Chrtist of Latter-Day Saints. PAF itself has been updated to a Windows version, but RDF hasn't. It is more difficult to use in Windows, because most Windows printers won't print output from DOS programs directly, and you have to resort to clumsy workarounds that take longer.

Also, RDF was designed in the days when most genealogists who used computers had computers with 360k floppy disks and no hard disks at all, so one of the important design considerations was to take up as little disk space as possible. My GENERAL.DAT file is about 1,2 Megabytes, which would be reaching the limits of a high-density floppy disk of the late 1980s.

Nowdays, with hard disk capacities being measured in terabytes rather than kilobytes, it would be nice to have an updated version that would give a little more room for additional information.

And there's the rub, because there isn't an updated version. RDF was designed in 1989 or earlier. But it still hasn't been surpassed. I know of no other program that can do what it does, as well as it does it. I can think of lots of ways in which it could be improved, but it still does what it does better than any other program out there.

I've looked at some other programs that I thought might be possible replacements. There were Genota and Genforms being developed by Dennis Allsopp in Australia, which didn't do quite the same thing, and there was Clooz. I bought Clooz 2.0 to test as a possible replacement, but found it too clunky and awkward to use, and entering information was too time-consuming.

Clooz 3 is now available -- an updating and streamlining of Clooz 2. But they are now working on Clooz 4.0, which will be a complete redesign and rewiting of Clooz 3 from the ground up, rather than a mere tweak. So I'm now hoping that, whatever else it includes, it will include the functionality and capability of RDF, enhanced, rather than diminished.

Yes, you could keep the information in RDF .DOC and .DAT files in a spreadsheet, but most spreadsheets still can't handle dates before 1900, nor can they handle partial or fuzzy dates like "ABT May 1832" or "AFT Sep 1856".

I wish I knew who wrote RDF. It was a work of genius, making the most of the capabilities of computers of its time. If it were updated to make use of today's computers, it would be very powerful indeed.
Posted by Steve Hayes at 10:51 1 comment:

It seems that Technorati had lost this blog's RSS feed, so am attempting to reapply it:

Technorati will need to verify that you are an author of the blog by looking for a unique code. Please put the following short code 527CQC975QC5 within a new blog post and publish it. This code must appear in the published post and it must also appear in your corresponding RSS feed once published.


I wonder if that will work