Genealogists using FamilySearch should be aware that FamilySearch, like some other interactive genealogy web sites, has begun introducing automated errors in place names.

The errors appear to arise from the laudable desire to encourage the use of standardised place names, which makes it easier to search for places. The downside of this is that when non-standard but correct place names are changed into standardised but incorrect ones, it makes places and people much harder to find.

One example is that in the 1841 Census of England, several people are shown as bring at St Martin, Essex. This refers to St Martin's parish in Colchester, Essex, but if one attaches such a census record as a source to a person in the collaborative tree, the FamilySearch software automatically changes the place to Chichester in Sussex, about 130 miles away. And if you then copy that record to your own family tree, the wrong place name will be copied too. 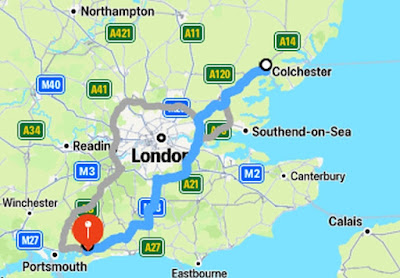 It is, of course, possible to change it to the correct place and copy it back to FamilySearch, but many researchers, unless they have studied several generations of a family in a place, will be likely to leave it, and just assume (wrongly) that the family moved around a lot.

One way to check in the instance I mentioned is that if the census record gives a street address, you can do a web search for the street in both towns. In this case, a search for Stockwell Street Colchester shows that there is such a street there, while searching for Stockwell Street in Chichester shows that there isn't one. But this might not work for common names like High Street or Main Street.

Until the people at FamilySearch fix this bug, genealogists should keep a sharp lookout for erroneous place names. Standardising place names is not a bad idea, but the software should suggest such names to users, and not just change them willy nilly.

Experienced genealogists might be capable of interpreting the various place names used by people like census enumerators, but there is no way that software programmers can interpret them, sight unseen, and they shouldn't even try. It is better to have an accurate but non-standard place name than one that is fully standardised, but wrong.

WikiTree has a similar flaw. It appears to create its own drop-down lists of suggested place names, which makes it easy to inadvertently enter an incorrect place name. Try, for, example, "Adelaide" or "Graaff-Reinet" which, to a South African genealogist, are most likely intended to be locations in the Eastern Cape.

The situation is compounded by the politically correct issue of using either current or historical place names. Tulbach, Rodezand or Waveren?