Lives of the First World War

My blogging friend Cherry Pie has drawn attention to an interesting project in this regard -- Cherie's Place: Lives of the First World War:


My post is about a project launched by the Imperial War Museum (IWM). It is a digital memorial to record the life of every person who served in uniform or worked on the home front during World War One. An ancestor of mine is listed on the site so I will be taking a small part in the project. I invite you to join me there.

She describes the project more fully here, and  as the blurb says:


Today (12 May 2014), Imperial War Museums (IWM) has launched Lives of the First World War and needs your help to tell the life stories of millions of people from across Britain and the Commonwealth who served in uniform and worked on the home front.

Over the course of the next five years, Lives of the First World War, delivered in partnership with DC Thomson Family History, will become the permanent digital memorial to over 8 million men and women. IWM is urging everyone to discover their First World War connections and remember and share these with the rest of the world online at www.livesofthefirstworldwar.org


I don’t have any ancestors who served in the First World War — they seemed to be all the wrong age to do so, either too old or too young, but my wife has some, and we both have some collateral relatives who did so, great uncles, second cousins twice removed and so on. I recently wrote about one of them in our family history blog, Growden family in Lancashire | Hayes & Greene family history. 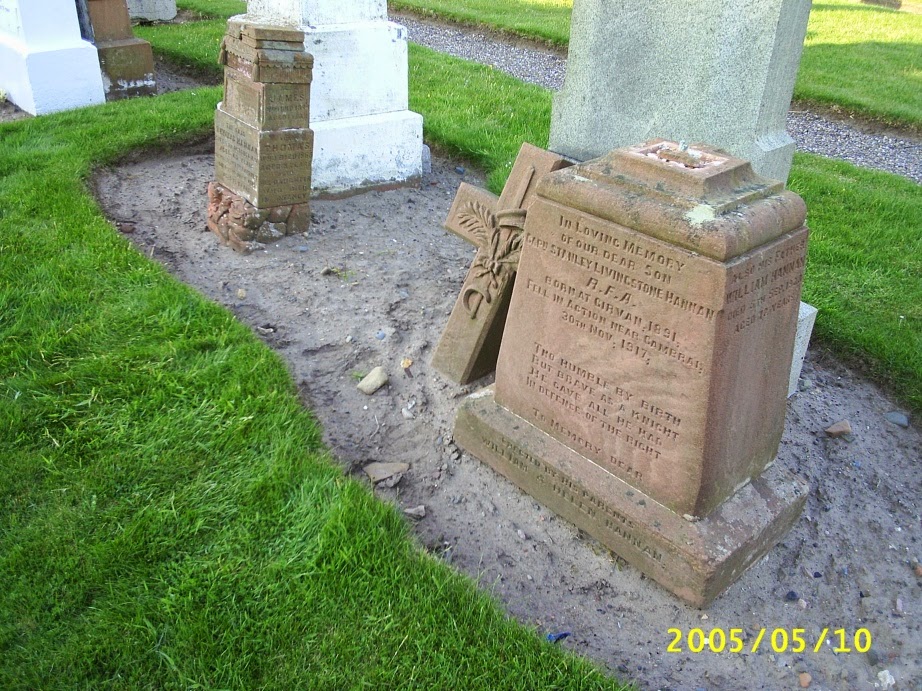 There is also a memorial to another one here. He was Captain Stanley Livingstone Hannan, who was killed at Cambrai, and has a memorial in Girvan Cemetery, but his father was jailed as a conscientious objector, so there are contrasting lives of the First World War even in the same family.

So this seems to be an interesting project for genealogists to participate in, and it will no doubt become a useful genealogical resource.

When I try to register for the site, they send a Confirmation E-mail, which is wirtten in "lazy HTML", with no plain text alternative. And when I click on the "Confirm Registration" link, it crashes my e-mail program, every time, and sends off a report to Microsoft to report why the program had to close. I think the Imperial War Museum's programmers have been too clever by half. Lazy HTML (linking to pictures etc on a remote web site, instead of including them in the mail) is a spammer's trick, and my e-mail reader immediately flags such messages as "Junk and Suspicious Mail", and rightly so, since e-mail that crashes the reader is a form of malware. And it is all so unnecessary -- all it needs is a plain text URL to click on for confirmation and the job is done.
Posted by Steve Hayes at 04:53 No comments: