There's been quite a bit of discussion in the South African Genealogy Mailing List recently about the problems of growing cities and lack of cemetery space. The latest round was sparked off by the news that Buffalo City (East London) Municipality is considering re-using graves because of shortage of cemetery space. And as people have contributed to the discussion, there are various stories about other cities thinking of doing the same. 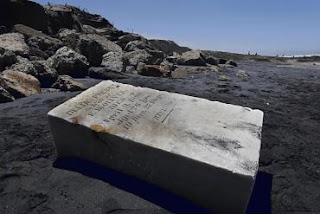 But there's nothing new in this. In the very same week, this news story surfaced in San Francisco - Tombstones from long ago surfacing on S.F. beach:

Strong winds and shifting sands have uncovered an eerie reminder of San Francisco's past: discarded gravestones and broken tomb markers used decades ago to shore up the Ocean Beach seawall.The tombstones became visible this week, including bits and pieces of marble and granite that once marked the final resting places of citizens long dead.One of them is the nearly intact marble tombstone of Delia Presby Oliver, who died at the age of 26 on Apr. 9, 1890.

Her remains were removed and reburied when San Francisco authorities closed nearly all the city cemeteries and moved the bodies to Colma in the early 20th century - part of a move to make space for the growing city. Oliver's original tombstone and thousands like it were used as landfill or in other ways throughout San Francisco.

Some were used as breakwaters. Pieces of others were used to line the gutters of Haight-Ashbury's Buena Vista Park. Some gravestones were used to build the seawall along the Great Highway. Large tombs and crypts were dumped into San Francisco Bay.

I wonder if the inscriptions on these tombstones were recorded before they were dumped?

In the UK burials often took place in churchyards, but as villages were swallowed up in urban sprawl, cemeteries were established, and many of the churchyards have been cleared of graves. One solution has been to put all the old gravestones around the walls of the churchyard. I must admit I hadn't thought of them being dumped into the sea.

I also wonder about the culture clash in South Africa. There have been some claims to land restitution on the grounds that people's ancestors are buried in such and such a place. And in the past there was a lot of resistance to people being forcibly moved in the ethnic cleansing that took place under apartheid, on the grounds that they did not want to be moved from the places where their ancestors were buried. I wonder how well the Buffalo City Municipality's plans will sit with people who see things in that light?
Posted by Steve Hayes at 10:29 No comments:

One of the things that can sometimes help genealogists is to know the popularity of names at different periods and in different places. Names can very often date people, sometimes quite precisely.

One of the most spectacular examples in recent times is Nevaeh ("heaven" backwards), which in England and Wales at least has grown spectacularly in popularity for girls, thought not at all among boys. 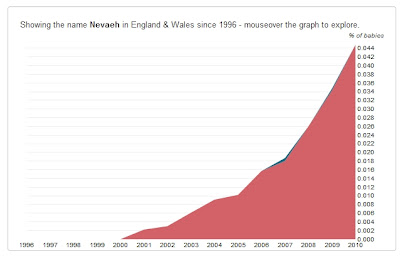 You can find this, and other information on the popularity of names in England and Wales here Babies called Nevaeh in England & Wales since 1996.

One of the things I find slightly odd about these sites is that they are almost always called "Baby names", but those before 2000 are now teenager names, not baby names.

Another thing to watch out for is the way names change sex. That does not seem to have happened to Nevaeh yet, at least not in the UK, where it seems to be strictly a girl's name.

But when I was growing up, for example, anyone called "eslie was invariably male, and the feminine form of the name was Lesley. More recently, however, I've come across some female Leslies, and some male Lesleys. With some names, like Ashley/Ashleigh, it's impossible to tell.

That's OK when you know the people concerned, but when you are entering the names of relatives you've just discovered into a genealogy program it often wants to know their sex, and sometimes you just don't know.
Posted by Steve Hayes at 17:23 No comments: