Event-based history and genealogy software for family historians, biographers and others

If you are looking for a lineage-linked genealogy program to keep your family tree and show all your relations, there is a wide choice available. Some, like Legacy and Personal Ancestal File (PAF) are free, others are shareware, and others you have to pay for up front. They all do much the same thing -- they allow you to enter people who are related to one another and show the relationships between them.

What they are not so good for, however, are collecting information about people who you think might be related, but aren't sure of. Lineage linked programs are fairly narrowly genealogical. Family historians often have wider interests, however, and sometimes it is important to show other people who influenced a family -- people like business partners, close friends, bosses and so on. These people are related, though the relationship is not genealogical.

So I think there is a real need for an event-based program to be used as a research tool, not only for genealogists and family historians, but also for general historians, biographers and others. It would differ from lineage-linked genealogy programs in that it would not only include people that were relatives, but friends and acquaintaces, work colleagues, and even enemies. It would be a useful tool for a biographer trying to keep track of the events in the life of their subject, or for someone writing general history as well. It could even be used by detectives tracing the activities of a suspect, or the sequence of events relating to a particular crime or series of crimes.

The main part of the database would be a chronological list of events, with links to people and organisations assocated with these events. The organisations could be both formal and informal groups — a political party, church, club, school, hospital, business firm, trade union, family or any other human group.

The basic outline of the program would look something like this: 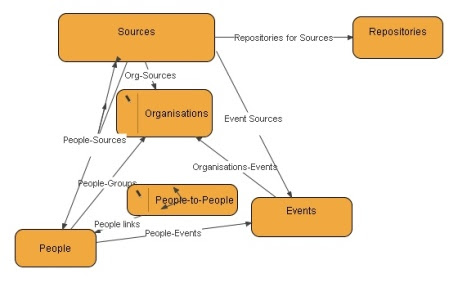 The “people” part would not only be for family members, as one finds in lineage-linked genealogy programs, but for non-related people, like friends, work colleagues, teachers, pupils, godparents, acquaintances and so on. Perhaps it could also be useful in testing theories of six degrees of relationship — that we are only six degrees of relationship away from knowing everyone else on earth, and that my wife’s boss’s godmother’s cousin’s penfriend’s vet knows me.

A biographer could use it as a research tool for keeping track of the events in the life of the subject. One kind of early record might be a baptism record, for example. The baptism would be the event, and would link to people who were known to be present -- parents, godparents, and the church minister performing the ceremony, but others who were present as well. The godparents might or might not be genealogically related to the person being baptised, but would be recorded anyway. As information is added to the database, the relationship and influence of that person on the subject can be followed.

It could also be used by fiction writers for keeping track of events and characters in a novel.

A historian using such a program could use it for tracing the history of an organisation and its leaders, and chronologically arranging events in the life of the organisation, with information about the people involved in each event. A literary historian could use it to trace the interrelationships of a school of writers.

This program would be a research tool for recording both evidence and conclusions. It could be used by genealogist in conjunction with a lineage-linked genealogy program and a note-taking program. It could be used by biographers and historians on its own, or with a note-taking program. It would enable the user to link various pieces of evidence to show relationships between them and suggest conclusions.

My problem is that though I have a fairly good idea of what I want, I'm not a programming fundi, and can't write such a program myself. What it really needs is a group of programmers and researchers who could discuss their research needs, and produce a program that meets those needs.

If you are reading this and feel the need for such a program, there is a forum for discussing it, which you are welcome to join. I've also posted a skeleton of tables in MS Access based on the model above, which you can download to experiment with and comment on.
Posted by Steve Hayes at 07:54 8 comments: 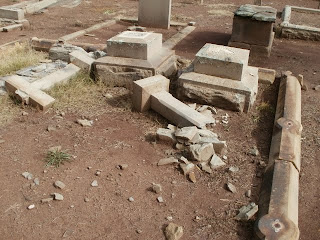 On our recent holiday we visited Queenstown cemetery in the Eastern Cape to take photos of my great grandparents graves. It was hard to find them, and as we walked up and down looking, we passed a number of graves that had been vandalised, with headstones knocked over, and crosses broken.

Eventually we found the graves we were looking for, but though the stones were intact, the metal railings around the grave had been removed, presumbably by metal thieves. We took quite a lot of photos of them, just in case the next time we, or other members of the family try to find them, they too are lying on the ground with the inscription side down, and possibly broken into pieces.
Posted by Steve Hayes at 15:53 1 comment: