Yet another example of the way in which FamilySearch is gradually destroying the records it has taken decades to collect. This is the third post in a row on this blog showing how FamilySearch is mangling place names in its records with its faulty algorithms. 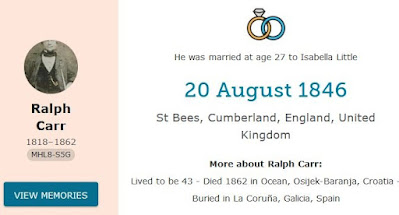 Ralph Carr was my wife Val's great-great grandfather. He was a mariner, and died at sea. He was indeed buried at La Coruña, Galicia, Spain, because that happened to be the nearest port, but Croatia is quite a long way from Spain.

FamilySearch's algorithm seems to have translated "At Sea" to "Ocean", and then identified it with a place in Croatia.

It really is high time that the people at FamilySearch recognised that their algorithm is faulty, and stopped it moving people from town to town, from country to country, and even, in some cases, from continent to continent.