Here's an article with some useful tips on preserving family history records digitally.

Preserving Your Family History Records Digitally: While gathering family history records over the years, you’ve probably been preserving them physically. So why consider preserving them digitally now?

Following on from yesterday's post on Untold Lives, last night the census enumerator called. He was scared of our dogs, so gave me the form to fill in, which saves a bit of time anyway, and it always seems such a fruitless exercise, as we are told that the forms will be recycled once statistical information has been abstracted.

In the last couple of months we've been looking quite a lot at UK census information from the 19th century for our family history, and think that the census records tell us quite a lot about "untold lives".

In the 18th century we have Thomas Gray's musings in a country churchyard in England:

Beneath those rugged elms, that yew-tree's shade,
Where heaves the turf in many a mould'ring heap,
Each in his narrow cell for ever laid,
The rude Forefathers of the hamlet sleep.

Let not Ambition mock their useful toil,
Their homely joys, and destiny obscure;
Nor Grandeur hear with a disdainful smile
The short and simple annals of the poor.

You can read the whole of Thomas Gray's Elegy written in a country churchyard here. 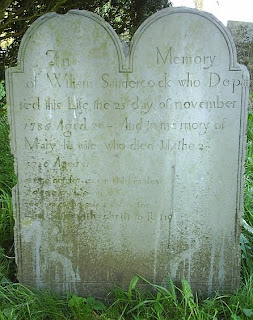 And a few years ago we visited the UK and in a country churchyard in Cardinham, Cornwall, found the annals of some of my 18th-century ancestors, my seventh great grandparents, William Sandercock (1705-1786) and his wife Mary Verran (1705-1786).

To memory of William Sandercock who departed this life the 25th day of November 1786 Aged 80 years. And in memory of Mary his wife who died 2nd July 1786 aged 81 years. Morne not for us our children dear Tho here we lie in death We hope in heaven to meet again And there in Christ to rest.

Such were the short and simple annals of the poor in the 18th century.

But in the 20th century, having collected the information about untold lives, we wantonly destroy them. Perhaps one day the descendant of an illegal immigrant, living in a shack in an informal settlement, will want to know where he came from, and the information will have been mashed up, and turned into a percentage.

It makes filling in the census forms seem so futile.
Posted by Steve Hayes at 06:25 No comments:

The British Library has an interesting biographical blog, which may be of interest to family historians: About this blog - Untold Lives:

The British Library’s collections contain stories of people’s lives worldwide, from the dawn of history to the present day. They are told through the written word, images, audio-visual and digital materials. The Untold Lives blog shares those stories, providing fascinating and unusual insights into the past and bringing out from the shadows lives that have been overlooked or forgotten.

We hope to inspire new research and encourage enjoyment, knowledge and understanding of the British Library and its collections. In addition to stories from the past, we give glimpses of the hidden life of the Library and provide information about events and exhibitions. The blog contains many links to act as signposts to research information and online resources that you can explore for work or pleasure.

The British Library is one of the Copyright Libraries for the UK, which means that a copy of every book, journal, magazine etc published in the UK has to be sent there by law, so their holdings are extensive.

At one time it was also a Copyright Library for several Commonwealth countries. Until about 1964, for example, it was one of the six copyright libraries for South Africa. I remember, as an editor of a couple of small student magazines, addressing copies to "The Keeper of Printed Books, British Museum".

What this means is that as a library of record for several countries, its holdings are extensive, and many quite obscure publications, which might otherwise have vanished, may be found there.

Another source of untold lives is the Dictionary of African Christian Biography, which is worth a look if you are interested in African biography.
Posted by Steve Hayes at 13:53 No comments:

The importance of historical literacy

The Witness: LAST Thursday the University of KwaZulu-Natal Special Collections Day provided a showcase for the Alan Paton Centre and Struggle Archive, the Gandhi-Luthuli Documentation Centre, the Centre for African Literary Studies and, the hosts of the event, the Campbell Collections.

My friend (and cousin-in-law) John Aitchison also spoke on the occasion.

academic and activist John Aitchison, who donated his archive to the APC, spoke on the subject of historical literacy.

Aitchison said that “historical literacy­” in South Africa was currently suffering from the three As — “aphasia, amnesia and aporia”.

Aphasia — a difficulty in remembering (and by extension, speaking) because of some head injury or infection. In historical terms the head injury took the form of the destruction of records during the apartheid period­. There was also little writing and documentation undertaken — “it was dangerous to do so” — resulting in a lack of internal writing on the struggle and hence the dominant record was written by exiles with their own particular ideological and political perspectives.

“We also have a tremendous fight against self-induced amnesia,” said Aitchison regarding the second A. “The often self-service amnesia of whites as well as the tendency to airbrush out the resistance from non-mainline ANC supporters — Nusas and other student protest groups, the Black Consciousness movement, the churches, NGOs, etc.”

Aporia is originally a Greek term denoting an impasse or state of puzzlement, inconsistency, doubt or indecision, another feature of the malaise­ affecting historical literacy. Aitchison said the cure could be found in the special collections and other archives that “different story” documents can be found that cast a new light on our history and deconstruct the new myths appearing about our past.

Historical literacy, according to Aitchison, apart from obviously being based heavily on our normal literacy, requires us to develop the skills to overcome these difficulties of the brutal lack of historical texts, the self-serving erasing of memories about the past, and the difficulty of understanding the “difficult readings” and getting access to them.

Which is why special collections are special.

The full article is well worth reading, as it gives examples of some of the hidden history that can be found.

THE collection includes Alan Paton’s papers, the manuscripts of his poetry and short stories and his correspondence; the archives of the South African Liberal Party; the documents of organisations involved in the struggle against apartheid in the KwaZulu-Natal midlands, such as the Black Sash, the Detainees Aid Committee and the Five Freedoms Forum. The Special Collections of the Natal Society, which includes books collected over the past 150 years by the Natal Society, and the O’Brien and Hattersley Collections. The oral history project: ‘Recording the anti-apartheid struggle in KwaZulu-Natal’ recorded interviews with many activists. The centre also houses the Sinomlando Project, the oral history project of the School of Theology.

Website of the Alan Patron Struggle Centre and Archives.
Posted by Steve Hayes at 19:17 No comments: